It’s Not In The Water! 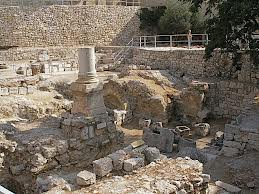 ‘Do you want to be made well?’ …Jesus said to him, ‘Stand up, take your mat and walk.’ …and he took up his mat and began to walk (John 5:1-15).Wellness isn’t just about the (physical) body.  In Jerusalem, there was a man lying by the Sheep Gate where there is a pool of water. It is said that during certain seasons an Angel of the Lord comes down and causes the pool of water to stir up. It is believed that the first to enter into the water during this time would be healed. Of course there would be any number of people at any given time waiting to get in to this water. And as one could imagine, in this kind of survival of the fittest existence many people leave unhealed. When Jesus comes along and sees this man whom he knows has been coming to the pool for 38 years, his question as to whether the man wants to be made well is rhetorical. He wouldn’t be hanging out at the pool if he didn’t want to be made well. Knowing this, Jesus gives him a command; “Stand up, take your mat and walk!” Now the man has a choice to make. Some action has to be taken. He can either continue to believe in the water or take a chance and believe in the word of Christ. He has everything to gain and nothing to lose except perhaps another 38 years.