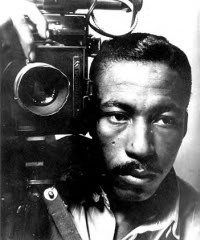 Gordon Gordon Roger Alexander Buchanan Parks was a prolific, world-renowned photographer, writer, composer and filmmaker known for his work on projects like Shaft and The Learning Tree.

Born on November 30, 1912, in Fort Scott, Kansas, Gordon Parks was a self-taught artist who became the first African-American photographer for Life and Vogue magazines. He also pursued movie directing and screenwriting, working at the helm of the films The Learning Tree, based on a novel he wrote, and Shaft. Parks has published several memoirs and retrospectives as well, including A Choice of Weapons.

His father, Jackson Parks, was a vegetable farmer, and the family lived modestly. Parks faced aggressive discrimination as a child. He attended a segregated elementary school and was not allowed to participate in activities at his high school because of his race. The teachers actively discouraged African-American students from seeking higher education. After the death of his mother, Sarah, when he was 14, Parks left home. He lived with relatives for a short time before setting off on his own, taking whatever odd jobs he could find.

Parks purchased his first camera at the age of 25 after viewing photographs of migrant workers in a magazine. His early fashion photographs caught the attention of Marva Louis, wife of the boxing champion Joe Louis, who encouraged Parks to move to a larger city. Parks and his wife, Sally, relocated to Chicago in 1940.

In 1969, Parks became the first African American to direct a major Hollywood movie, the film adaptation of The Learning Tree. He wrote the screenplay and composed the score for the film.

Parks’s next film, Shaft, was one of the biggest box-office hits of 1971. Starring Richard Roundtree as detective John Shaft, the movie inspired a genre of films known as blaxploitation. The 93-year-old Gordon Parks died of cancer on March 7, 2006, in New York City. He is buried in his hometown of Fort Scott, Kansas. Today, Parks is remembered for his pioneering work in the field of photography, which has been an inspiration to many.

Quote:  “There’s another horizon out there, one more horizon that you have to make for yourself and let other people discover it, and someone else will take it further on, you know.”