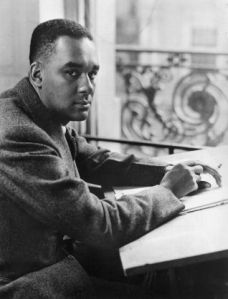 Richard Nathaniel Wright was born on September 4, 1908, near Natchez, Mississippi. The grandson of slaves and the son of a sharecropper, Wright was largely raised by his mother, a caring woman who became a single parent after her husband left the family when Wright was five years old.

Schooled in Jackson, Mississippi, Wright only managed to get a ninth-grade education, but he was a voracious reader and showed early on that he had a gift with words. When he was 16, a short story of his was published in a Southern African-American newspaper.

After leaving school, Wright worked a series of odd jobs, and in his free time he delved into American literature. To pursue his literary interests, Wright went as far as to forge notes so he could take out books on a white coworker’s library card, as blacks were not allowed to use the public libraries in Memphis. The more he read about the world, the more Wright longed to see it and make a permanent break from the Jim Crow South. “I want my life to count for something,” he told a friend.

In 1927, Wright finally left the South and moved to Chicago, where he worked at a post office and also swept streets. But like so many Americans struggling through the Depression, Wright fell prey to bouts of poverty.

In 1940 with the publication of the novel Native Son, which told the story of 20-year-old African-American male Bigger Thomas. The book brought Wright fame and freedom to write. It was a regular atop the bestseller lists and became the first book by an African-American writer to be selected by the Book-of-the-Month Club. A stage version (by Wright and Paul Green) followed in 1941, and Wright himself later played the title role in a film version made in Argentina.

In 1945,Wright published Black Boy, which offered a moving account of his childhood and youth in the South. It also depicts extreme poverty and his accounts of racial violence against blacks. The book greatly advanced Wright’s reputation, but after living mainly in Mexico (1940–6), he had become so disillusioned with both the Communist Party and white America that he went off to Paris, where he lived the rest of his life as an expatriate.

He continued to write novels, including The Outsider (1953) and The Long Dream (1958), and nonfiction, such as Black Power (1954) and White Man, Listen! (1957), and was regarded by many writers as an inspiration. His naturalistic fiction no longer has the standing it once enjoyed, but his life and works remain exemplary.

I enjoy the word of God and every opportunity to let others know that sometimes life can be like crusty bread on the outside but to live in Christ is like finding the fluffy crumb within. Taste and See that the Lord is good, Psalm 34:8.
Join 815 other followers