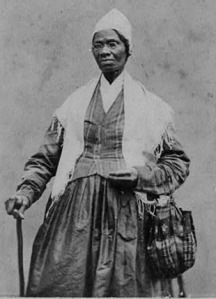 Born Isabella Baumfree circa 1797, Sojourner Truth was one of as many as 12 children born to James and Elizabeth Baumfree in the town of Swartekill, in Ulster County, New York. Truth’s date of birth was not recorded, as was typical of children born into slavery, but historians estimate that she was likely born around 1797. Her father, James Baumfree, was a slave captured in modern-day Ghana; Elizabeth Baumfree, also known as Mau-Mau Bet, was the daughter of slaves from Guinea. The Baumfree family was owned by Colonel Hardenbergh, and lived at the colonel’s estate in Esopus, New York, 95 miles north of New York City. The area had once been under Dutch control, and both the Baumfrees and the Hardenbaughs spoke Dutch in their daily lives.

After the colonel’s death, ownership of the Baumfrees passed to his son, Charles. The Baumfrees were separated after the death of Charles Hardenbergh in 1806. The 9-year-old Truth, known as “Belle” at the time, was sold at an auction with a flock of sheep for $100. Her new owner was a man named John Neely, whom Truth remembered as harsh and violent. She would be sold twice more over the following two years, finally coming to reside on the property of John Dumont at West Park, New York. It was during these years that Truth learned to speak English for the first time.

The state of New York, which had begun to negotiate the abolition of slavery in 1799, emancipated all slaves on July 4, 1827. The shift did not come soon enough for Truth. After John Dumont reneged on a promise to emancipate Truth in late 1826, she escaped to freedom with her infant daughter, Sophia. Her other daughter and son stayed behind. Shortly after her escape, Truth learned that her son Peter, then 5 years old, had been illegally sold to a man in Alabama. She took the issue to court and eventually secured Peter’s return from the South. The case was one of the first in which a black woman successfully challenged a white man in a United States court.

In 1850 her memoirs were published under the title The Narrative of Sojourner Truth: A Northern Slave. That same year, Truth spoke at the first National Women’s Rights Convention in Worcester, Massachusetts. She was one of several escaped slaves, along with Frederick Douglass and Harriet Tubman, to rise to prominence as an abolitionist leader and a testament to the humanity of enslaved people. A major project of her later life was the movement to secure land grants from the federal government for former slaves. She argued that ownership of private property, and particularly land, would give African Americans self-sufficiency and free them from a kind of indentured servitude to wealthy landowners.

In 1864, Truth was called to Washington, D.C., to contribute to the National Freedman’s Relief Association. On at least one occasion, Truth met and spoke with President Abraham Lincoln about her beliefs and her experience.Truth is remembered as one of the foremost leaders of the abolition movement and an early advocate of women’s rights.

Sojourner Truth died at her home in Battle Creek, Michigan, on November 26, 1883. She is buried alongside her family at Battle Creek’s Oak Hill Cemetery.