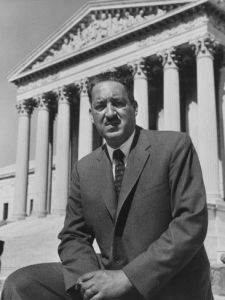 “In recognizing the humanity of our fellow beings, we pay ourselves the highest tribute.”

Thurgood Marshall was born on July 2, 1908, in Baltimore, Maryland. His father, William Marshall, the grandson of a slave, worked as a steward at an exclusive club. His mother, Norma, was a kindergarten teacher. One of William Marshall’s favorite pastimes was to listen to cases at the local courthouse before returning home to rehash the lawyers’ arguments with his sons. Thurgood Marshall later recalled, “Now you want to know how I got involved in law? I don’t know. The nearest I can get is that my dad, my brother, and I had the most violent arguments you ever heard about anything. I guess we argued five out of seven nights at the dinner table.”

Marshall attended Baltimore’s Colored High and Training School (later renamed Frederick Douglass High School), where he was an above-average student and put his finely honed skills of argument to use as a star member of the debate team. The teenaged Marshall was also something of a mischievous troublemaker. His greatest high school accomplishment, memorizing the entire United States Constitution, was actually a teacher’s punishment for misbehaving in class.

After graduating from high school in 1926, Marshall attended Lincoln University, a historically black college in Pennsylvania. There, he joined a remarkably distinguished student body that included Kwame Nkrumah, the future president of Ghana; Langston Hughes, the great poet; and Cab Calloway, the famous jazz singer.

After graduating from Lincoln with honors in 1930, Marshall applied to the University of Maryland Law School. Despite being overqualified academically, Marshall was rejected because of his race. This firsthand experience with discrimination in education made a lasting impression on Marshall and helped determine the future course of his career. Instead of Maryland, Marshall attended law school in Washington, D.C. at Howard University, another historically black school. The dean of Howard Law School at the time was the pioneering civil rights lawyer Charles Houston. Marshall quickly fell under the tutelage of Houston, a notorious disciplinarian and extraordinarily demanding professor. Marshall recalled of Houston, “He would not be satisfied until he went to a dance on the campus and found all of his students sitting around the wall reading law books instead of partying.” Marshall graduated magna cum laude from Howard in 1933.

However, the great achievement of Marshall’s career as a civil-rights lawyer was his victory in the landmark 1954 Supreme Court case Brown v. Board of Education of Topeka. The class action lawsuit was filed on behalf of a group of black parents in Topeka, Kansas on behalf of their children forced to attend all-black segregated schools. Through Brown v. Board, one of the most important cases of the 20th century, Marshall challenged head-on the legal underpinning of racial segregation, the doctrine of “separate but equal” established by the 1896 Supreme Court case Plessy v. Ferguson.

On May 17, 1954, the Supreme Court unanimously ruled that “separate educational facilities are inherently unequal,” and therefore racial segregation of public schools violated the equal protection clause of the 14th Amendment. While enforcement of the Court’s ruling proved to be uneven and painfully slow, Brown v. Board provided the legal foundation, and much of the inspiration, for the American Civil Rights Movement that unfolded over the next decade. At the same time, the case established Marshall as one of the most successful and prominent lawyers in America.

In 1961, then-newly elected President John F. Kennedy appointed Thurgood Marshall as a judge for the U.S. Second Circuit Court of Appeals. Serving as a circuit court judge over the next four years, Marshall issued more than 100 decisions, none of which was overturned by the Supreme Court. Then, in 1965, Kennedy’s successor, Lyndon B. Johnson, appointed Marshall to serve as the first black U.S. solicitor general, the attorney designated to argue on behalf of the federal government before the Supreme Court. During his two years as solicitor general, Marshall won 14 of the 19 cases that he argued before the Supreme Court.

Finally, in 1967, President Johnson nominated Marshall to serve on the bench before which he had successfully argued so many times before—the United States Supreme Court. On October 2, 1967, Marshall was sworn in as a Supreme Court justice, becoming the first African American to serve on the nation’s highest court.

I enjoy the word of God and every opportunity to let others know that sometimes life can be like crusty bread on the outside but to live in Christ is like finding the fluffy crumb within. Taste and See that the Lord is good, Psalm 34:8.
Join 815 other followers