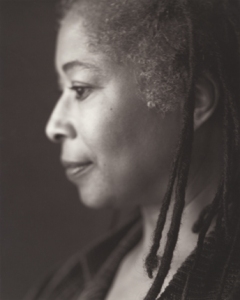 “For in the end, freedom is a personal and lonely battle; and one faces down fears of today so that those of tomorrow might be engaged.”

Novelist, poet and feminist Alice Malsenior Walker was born on February 9, 1944, in Eatonton, Georgia. Alice Walker is one of the most admired African-American writers working today. The youngest daughter of sharecroppers, she grew up poor. Her mother worked as a maid to help support the family’s eight children. When Walker was 8 years old, she suffered a serious injury: She was shot in the right eye with a BB pellet while playing with two of her brothers. Whitish scar tissue formed in her damaged eye, and she became self-conscious of this visible mark.

After the incident, Walker largely withdrew from the world around her. “For a long time, I thought I was very ugly and disfigured,” she told John O’Brien in an interview that was published in Alice Walker: Critical Perspectives, Past and Present. “This made me shy and timid, and I often reacted to insults and slights that were not intended.” She found solace in reading and writing poetry.

Living in the racially divided South, Walker attended segregated schools. She graduated from her high school as the valedictorian of her class. With the help of a scholarship, she was able to go to Spelman College in Atlanta. She later switched to Sarah Lawrence College in New York City. While at Sarah Lawrence, Walker visited Africa as part of a study-abroad program. She graduated in 1965—the same year that she published her first short story. After college, Walker worked as a social worker, teacher and lecturer. She became active in the Civil Rights Movement, fighting for equality for all African Americans. Her experiences informed her first collection of poetry, Once, which was published in 1968. Better known now as a novelist, Walker showed her talents for storytelling in her debut work, Third Life of Grange Copeland (1970).

Walker’s career as a writer took flight with the publication of her third novel, The Color Purple, in 1982. Set in the early 1900s, the novel explores the female African-American experience through the life and struggles of its narrator, Celie. Celie suffers terrible abuse at the hands of her father, and later, from her husband. The compelling work won Walker both the Pulitzer Prize for Fiction and the National Book Award for Fiction in 1983.

Three years later, Walker’s story made it to the big screen: Steven Spielberg directed The Color Purple, which starred Whoopi Goldberg as Celie, as well as Oprah Winfrey and Danny Glover. Like the novel, the movie was a critical success, receiving 11 Academy Award nominations.

After more than four decades as a writer, Alice Walker shows no signs of slowing down. In 2012, she released The Chicken Chronicles; in this latest memoir, she ruminates on caring for her flock of chickens. Following the release of The Chicken Chronicles, she began working on The Cushion in the Road, a collection of mediations on a variety of subjects slated to be published in 2013.