Now we have received not the spirit of the world, but the spirit that is from God, so that we may understand the gifts bestowed on us…  1 Corinthians 2:1-13  Sometimes we take bad advise. Everything in the spirit is discernible, yet the human spirit and God’s spirit are not the same. They don’t desire the same things. This journey will have many receding paths, unless we learn to discern between the two.

“The light shines in the darkness, and the darkness did not overcome it.” John 1:1-18  In the “Invisible Man” Ralph Waldo Ellison describes invisibility like being in a dark, black hole; lighted with 1369 light bulbs. When he is out of the hole, he speaks of struggles, battles, and disappointments, trying to do the right thing as those around him define what was right. Yet somehow, he could never be seen. I have to admit, sometimes life in Christ feels much like Ellison’s character. Given the time and place, I wonder if Christ sometimes felt the same way – at least until the day he climbed up that mountain. Literally or figuratively, to climb atop any mountain is in itself a feat to be celebrated and not without internal reward. However, eventually the journey back down the mountain has to be made. Upon his return, Jesus met with the same anxieties of life that plagued God’s people before he went up to pray. But he met them with a re-affirmation, a stronger resolve to accomplish the Father’s will and the confirmation that he in fact is the light that brightens a dark world. Today, through our faith in Christ we too are that light for a veiled world. We meet with the same anxieties of the poor in spirit, the marginalized and the disinherited. And, yes sometimes we go unnoticed. But the affirmation and confirmation that is Christ’s is also our affirmation and confirmation, a gift from God for those who choose to climb that mountain and return re-affrmed to continue the mission of Christ, in a veiled and broken world, knowing that no matter how dark it gets, we are never invisible to God. 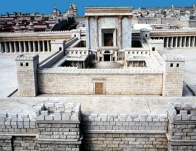 “Look, Teacher, what large stones and what large buildings!” Mark 13:1-13  A woman with two copper coins has just given all that she has as an offering in the Temple. Upon leaving, one of Jesus’ disciples is enamored with the building! How quickly we become distracted by the obvious and forget the basic rules of life. When people like this woman give all that they have great things do in fact happen. So it is, in this journey, we give all that we have and do what we are able out of glory and honor to God, that we may see the works of God’s hand and not of our own. My prayer for each of us today is that we not become distracted by the obvious and remember that God’s plan for us happens from within and is far greater than any building.

Mark 13:1-13 Then Jesus asked him, ‘Do you see these great buildings? Not one stone will be left here upon another; all will be thrown down.’ …and you will be hated by all because of my name. But the one who endures to the end will be saved.

As the scripture in 2 Samuel continues, David did not get to build that house of cedar. Essentially I believe David’s heart was in the right place but his concept was wrong. Neither do we get to build the walls in which God’s spirit dwells, because it is suppose to dwell within us, so that where ever we go God’s presence goes with us. It is this kind of reconciliation that is God’s greater plan. As builders for God, we have a responsibility to build this house he has generously given, that being our life through Christ. Perhaps God may have believed that David was in danger of creating a physical structure, that in the end was more of a hindrance to his plan and God needed David to know and it is important for us to understand that God’s presence is not the structure. God’s presence is not the riches. God’s presence is our life in Christ. It is a life that loves God and loves neighbor as self. It is why we often say that church is not the building. Church is the people in order that the gospel is not restricted to one place and is made accessible to everyone. Otherwise we risk the walls we build becoming more important than the people they were intended to serve. Any “walls” that we build (internally or externally), God will surely cause to tumble when they prevent access to him.

I believe the good news for us today is that God understands that our journey will be challenging and much like Moses, David, the disciples and others; will be imperfect at times. However, I believe God is well pleased when we choose to remain on the journey and continue to maintain and reconcile the house that is the body of Christ.

When Christ wanted us to heed what he had to say he told a story. Jesus called it a parable. Although all parables have meaning, they don’t always have benefit to the hearer. One must be able to understand its meaning. Jesus said, (Mark 4:26-29) “The kingdom of God is as if someone would scatter seed on the ground, and would sleep and rise night and day, and the seed would sprout and grow, he does not know how. The earth produces of itself, first the stalk, then the head, then the full grain in the head. But when the grain is ripe, at once he goes in with his sickle, because the harvest has come.” The harder we try in this journey to take the fate of our own lives into our own hands, when fall, the greater the redemption in our own eyes seems to be. (But) our redemption, becomes our testimony; our own story about the seed that was planted and the growth through our experiences in the world that needed to take place. God’s presence of that seed, allows us to see that our fate has always been in God’s hands and that our fate is destined for something larger and more valuable than even we could imagine. It is then that the parables of the Kingdom are no longer riddled with metaphors to be deciphered. When we realize that the parables have taken on different meanings for us at various times in our lives, no longer are we prodigal but instead reconciled in our understanding of who God is and has always been. As we examine our selves in this journey and our own “perfect” imperfectness with the world, sometimes it is difficult to see what God sees in us. But when we consider the earthly relationship and its ultimate cycle of realization, which brings us back to the knowledge that indeed our Father can do anything, the Kingdom becomes clearer as we are able to see our selves in the parables for the benefit our own learning and ultimate growth.